Widows for Peace through Democracy (WPD) is a UK-based international non-profit organisation and charity. We work to ensure that widows of all ages, whatever their religion, ethnicity, caste, class, or nationality, are protected from discrimination, violence and poverty – thus enabling them to enjoy their full human rights as equal and valuable members of society. Our mission addresses the challenges below.

This number is now hugely increased by armed conflicts, migration, violent extremism, natural disasters, and epidemics of disease now including Covid-19.
Widows suffering marginalisation and deprivation of assets may resort to begging, child labour, withdrawal of children from education, early or enforced marriage of children and prostitution – creating a cycle of disadvantage and poverty within future generations that threatens progress with the Sustainable Development Goals.

In many countries widows are seen as a burden on society or even ‘ill-omened’, with consequent exclusion and abuse carried out by their own families and communities.
Widows often suffer traditional prohibitions on dress, diet and social mobility, and can be subjected to ‘widow inheritance’ in which a widow is forcibly ‘passed on’ to a designated male such as her deceased husband’s brother.
Even worse are the harmful traditional practices (HTPs) such as ritual ‘sexual cleansing’, where a widow is made to have unprotected sex with a male relation or even a non-relative.

In Kenya in 2017 Layla [not her real name], a twenty-five year old widowed mother of two children, refused to add soil to her husband’s grave.
Adding soil was a ritual burial practice taken to indicate that a widow would accept being sexually cleansed and ‘inherited’, and Layla was well aware of this.

Video evidence sent to WPD by the Rona Foundation showed Layla’s in-laws trying to force her to add soil – becoming violent and claiming that she came solely to gain funeral cash contributions and must have killed her husband.

Since by 2019 Layla’s relationship with her in-laws was still unresolved, she could only visit her former marital home once a year and had to live by doing casual work in Mombasa.

Although widow cleansing had been made illegal in Kenya since 2015, this example shows traditional cultural beliefs and practices evidently superseding that law.

Sexual and gender-based violence towards widows, frequently exacerbated by religious and ethnic discrimination, is widespread in such situations and tends to persist even after conflict has ended. Frequently lacking death certificates or any information on their partners’ whereabouts, ‘half widows’ (partners of the missing or forcibly disappeared) are often unable to access pensions or compensation, to claim any rightful inheritance, or remarry. 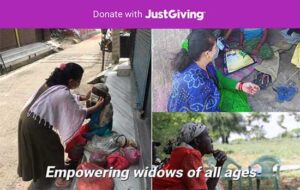