Widowhood and Poverty in the ECE 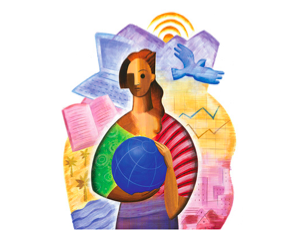 On November 3-5 2014, our founder Margaret Owen spoke at the Poverty Round Table about widowhood in the ECE region.
The ECE is a large region including Europe as well as Russia, the United States, and Israel. This is our first speaking opportunity specific to this region.

WIDOWHOOD IN THE CONTEXT OF ACTION AREA A: POVERTY

WIDOWHOOD ISSUES for the ECE Region: Beijing: 20 Years On

WIDOWS and WIDOWHOOD get no mention in the 1995 BEIJING DECLARATION AND PLATFORM FOR ACTION (BPFA) although each of the twelve action areas has clear relevance to the low status of widows and their children.

The Declaration and the BPFA recognise age discrimination as one of the factors contributing to barriers to women’s advancement, and specifically mentions older women with regard to their poverty, health, violence against them, and obstacles they face in entering the labour market, and as a civilian group particularly affected by armed conflict. Yet, regrettably, even scandalously, it ignores completely the problematic status of widows, widowhood-related discrimination and abuse which makes them so poor.

In 1995 there seems to have been a complete disregard of three crucial facts. First, that in many countries, developed and developing, widows of all ages experience multiple forms of discrimination and lack of rights that causes their poverty and vulnerability to violence; secondly, that in most countries the majority of older women are in fact widows; third, that widows generally have no collective voice; few organisations exist to represent them; and governments often have little knowledge of their life styles, needs or roles.

Widows also, especially the elderly, may experience what Professor Amartya Sen defines as “non-income poverty”: The poverty of isolation, exclusion and lack of dignity and respect. This aspect of poverty exposes them to violence, in the home, in the community, and, as has been revealed in the United Kingdom, ill-treatment and abuse in care and retirement homes.

The omission to address widows’ basic needs, reduce their poverty, and recognise and support their key important social and economic roles in their families and communities must be remedied in this review of the BPFA at the 59th CSW. Governments everywhere need to address this neglected gender and human rights issue.

For never before has the world witnessed such a huge increase in the numbers of widows of all ages, and wives of the “missing”, due to armed conflict, revolutions, sectarian violence, lawlessness and criminality, natural disasters, HIV and AIDS and harmful traditional practices such as child marriage that create further child widows.

The longer life expectancy of women over men, and the often great age differences in partners to the marriage has always been a contributory factor to the escalation in the figures for this category of women. Widows are less likely to remarry, especially if they have children, whereas widowers even in their later years, often find new partners, who will care for them in their old age. But the increase in the size of this category of women in recent years is unprecedented.

There are multiple reasons why widows are among the very poorest of poor women and why it needs urgently to be addressed by governments. The economic and social costs of ignoring this issue are grave. Widowhood is a root cause of poverty across the generations, impacting so irrevocably and negatively on widows’ children’s futures, promoting further inequalities that can fuel instability and conflict.

Common coping strategies of impoverished widowed mothers is to withdraw their girl children from education since the opportunity costs of keeping daughters in school is so high. Such survival initiatives are common throughout Eastern Europe and Russia, and among many migrant widows in the West. The cost of keeping children in secondary and tertiary education is often beyond the means of widows, and child labour in the informal economy is rapidly increasing in those European countries accommodating the strongest austerity measures.

Widows’ poverty is directly related to the absence of economic opportunities, and economic resources, including inheritance and land ownership; access to credit, education and support services, and their minimal, often for cultural reasons, participation in the decision-making processes.

Widows are usually given lower state pensions than men due to the gender pay gap in their work histories. Also, many widows may have never been employed in the formal sector, having been unpaid domestic workers in the family. Even where pensions and other social security systems exist that are intended to support the poorest people in populations, uneducated illiterate widows often face bureaucratic barriers to accessing what is their right. In some communities their pensions may be taken over by male members of their family and they are unable to benefit from them.

The poverty of widows and their daughters, especially in countries such as Moldova, Romania, Russia, Slovakia, makes them vulnerable to prostitution and human traffickers who transport them across the region for sex work and domestic slavery. Lithuania leads as a transit and sending country, due to its close proximity to the UK.

ECE governments have responded to the current economic recession with austerity cuts that have disproportionately affected women and children. In particular widows have seen the value of any pensions they may have greatly devalued and inadequate to sustain them in a decent mode of living.

In Portugal earlier this year the Constitutional Court declared illegal the government’s attempt to legislate to reduce the pensions of widows and widowers. In Greece, Cyprus and Italy, for example, widows, especially the elderly, and the unemployed, are living precariously, below the poverty line. In all countries in the region, the austerity cuts have eliminated or reduced other social support programmes that widows rely on, leaving them further isolated, to the detriment of their physical and mental health.

In some countries, particular in rural areas, widows may be barred, through discriminatory customs and traditions, from accessing their rights to inheritance, land ownership and property. There may be customs that harshly restrict their very mobility, barring them from participating in community activities that could help them to engage in training programmes for income-generation. Illiteracy, ignorance of their actual legal rights, and discriminatory practices, fear of violence may hinder their seeking remedies to improve their economic status. In parts of rural Azerbaijan, for example, customs prohibit widows from moving outside the homestead unless accompanied by an adult male relative, thus barring them from participation in community development programmes that could help them reduce their poverty and rebuild their lives economically and socially.

There is very little reliable data on widowhood for many of the 57 countries in the ECE, and several countries do not count widows in their census. Worldwide it is estimated that between 7% and 15% of all adult women are widows, making over 15 million widows worldwide and 500 million children of widowed mothers. However, these figures do not include child widows. Forced marriage and under age child marriage is a common practice in several ethnic minority groups, in the Czech Republic, Slovakia, Turkey, Bulgaria, and Hungary and is prevalent in the Roma population wherever they are.

There has been little research on the status of immigrant and asylum widows who have migrated or fled to EU countries. Widows from countries where their marital status is regarded as “inauspicious” may experience intra-household poverty where family members exploit them as domestic slaves, denying them equality in the sharing of food and other services.

Widows who seek asylum in EU countries alleging persecution by family members, the community or the state because they refuse to participate, for example, in harmful traditional practices in mourning and burial rites; flee forced marriage or levirate to a dead husband’s brother; are threatened with death in witchcraft accusations; are likely to suffer physical, sexual and psychological violence if they remain in their country of origin. These widows may have to wait several years for a decision, but in the meantime they endure great restrictions and deprivations.

In the United Kingdom asylum seekers are not allowed to work or receive council housing and must exist on the most paltry financial assistance so they can barely afford to eat, have no money for clothes and live in appalling conditions which put their lives in danger. Widows with young children and those that are alone live in terror of deportation, and their poverty and dependency as they seek asylum leaves them vulnerable to sexual violence and other forms of economic exploitation.

CONFLICT WIDOWS IN THE ECE

Conflicts in Armenia, Azerbaijan, Bosnia and Herzegovina, Kosovo, Kyrgyzstan, Turkey and the Ukraine have created uncounted numbers not only of widows but of wives of the “disappeared”. Widows predominate in refugee and IDP camps, where they are effectively the last in line for services and resettlement, and without an adult male to negotiate for them, are unable to obtain even the basic needs for their survival.

Furthermore conflicts outside the region have driven war widows to seek settlement in safer countries. Also ECE Countries are home to the many widows of their soldiers who have lost their lives recently in Afghanistan and Iraq, and in other conflicts and peace-keeping activities around the world. All of these women live in relative if not absolute poverty.