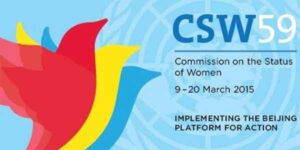 It is the 20th anniversary of the 1995 Beijing Platform for Action (BPfA).

Despite — and because of — the lack of mention of widows in the BPfA, our 59th CSW Statement draws the attention of the Member States to the relevance of the 12 critical action areas to widowhood.

Given the increasing numbers of widows and wives of the disappeared in so many regions, our statement appeals again to the UN Secretary-General to appoint a UN Representative on Widowhood and approve the drafting of a UN Resolution on Widowhood.

Widowhood issues must no longer be ignored, but must be strongly addressed in reviewing implementation of the Beijing Platform for Action.

Women for Human Rights-Single Women’s Group (WHR-SWG), a partner of the International NGO Widows for Peace through Democracy (WPD), works to promote the status of widows in Nepal, and acts as the Secretariat for the South Asian Network for Empowering Widows in Development (SANWED) which is the network for widows’ organizations of the six countries in the region.

Widows are never mentioned in the 1995 Beijing Platform for Action, although each one of the twelve critical areas has relevancy to their low status, poverty, exclusion, discrimination, and vulnerability to exploitation and violence. Uncounted millions of widows, of all ages, from child widows, to young mothers and elderly grandmothers across the world experience exclusion, stigma, violence and injustice.

Their plight is especially critical now in war-torn countries and in those developing countries where patriarchal interpretations of religion, custom and tradition deny women and girls their fundamental human rights, brand widows as “inauspicious” and regard them as chattels, beyond the protection of modern laws.

Today, twenty years after the 4th World Conference for Women, the numbers of widows and wives of the “disappeared” have increased exponentially, due to armed conflict, revolutions, sectarian violence, harmful traditional practices, HIV and AIDS and now Ebola.

In the Middle East region ISIS has created thousands of new widows and orphans dependent on them. In Syria and Iraq, as we write, widows, without any male adult to protect them, are being abducted, forced into prostitution, sexual slavery and concubinage. Widows and their children predominate among refugees and internally displaced people.

Moreover, in many developed countries, widows, especially elderly widows, live in poverty, isolation and without dignity or respect. Their pensions are barely adequate to sustain them at an acceptable and decent level and they are also the victims of neo-liberal austerity cuts.

However, there is little reliable data on widowhood, for example, the numbers, ages, social support systems, coping strategies, vulnerability to violence (within and outside the family), nor on access to justice. Governments need to work with widows’ organisations to fill this gap. Such statistics are vital to galvanise governments into positive policies for widows.

Discriminatory interpretations of traditional, customary and religious codes deprive them of the rights they should enjoy under modern and international laws, such as the UN Conventions on the Elimination of All Forms of Discrimination against Women, the Rights of the Child and UN Security Resolution 1325.

In spite of the intense efforts of many women’s NGOs who have attended previous sessions of the UN Commission on the Status of Women to get references to widows in previous Agreed Conclusions, and for “marital status” to be added to the criteria for the disaggregation of data, this has not occurred. This uncounted silenced category of women has been grossly neglected by many governments and the international community generally.

It is vital therefore that the review of implementation of the Platform for Action at this 59th Session of the UN Commission on the Status of Women recognises the urgency to address the complex cross-cutting widowhood issues, so that governments will address widows’ needs in the context of poverty, human rights, access to justice, the elimination of violence. It must recognise and support, using all available means, widows’ crucial roles in their families and communities as sole supporters of children and other dependants, and as key contributors to the economic and social fabric of society generally.

We draw to the attention of Member States some aspects of widows’ lives in the context of the twelve critical areas of concern which they should address:

WOMEN AND POVERTY: Widows are among the poorest of poor women, due to lack of rights to inheritance, land, property, employment, credit, and services. Widowhood is a root cause of poverty across the generations and must be addressed through the post 2015 Millennium Development Goals.

EDUCATION AND TRAINING OF WOMEN: Widows’ marginalisation, illiteracy, forced immobility and oppression under harmful traditional practices bars them from accessing training and employment. The most common first survival strategy of poor widows is to remove their children – girl children first – from school. Widows’ daughters are thus deprived of their fundamental rights to education and are most at risk of early forced marriage, leading to early child widowhood.

WOMEN AND HEALTH: Widows suffer disproportionately in the context of both physical and mental health, due to extreme discrimination both within the family and in the community. Isolation, poor nutrition, physical and mental abuse, harmful mourning and burial rites, lead to low life expectancy, depression, and suicide.

VIOLENCE AGAINST WOMEN: The blanket of silence on widowhood violence must be lifted. Widows often experience physical, sexual and psychological violence at the hands of family members, and as unprotected women in society at large, especially when they are minority women, or are refugees and internally displaced people, migrants, and asylum seekers. Widows and their daughters are prime targets for rape and are vulnerable to economic and sexual exploitation, for example, by traffickers. Widows, accused of witchcraft, may be stoned or beaten to death.

WOMEN AND ARMED CONFLICT: Conflict created uncounted millions of widows and wives of the “disappeared”, and widows predominate in camps for refugees and internally displaced people. They need to be represented at all peace tables, and seen as key actors in post-conflict resolutions. Widows, as survivors of massacres, who may also be rape victims, need protection and support as witnesses in war crime tribunals, and require specific actions to assist them to rebuild their lives through restorative justice processes.

WOMEN AND THE ECONOMY: Widows predominate in the informal economy, and their economic contributions are not recognised.

WOMEN IN POWER AND DECISION-MAKING: It is vital that widows’ voices are heard by government, so as to influence policy making. Therefore support should be given to widows to form their own associations so they have a collective voice. Widows need to be represented in peace tables in context of UN Security Council Resolution 1325 and subsequent resolutions on Women, Peace and Security.

INSTITUTIONAL MECHANISMS FOR THE ADVANCEMENT OF WOMEN: National Machineries for the Advancement of Women must include in their membership Widows’ organisations, as one of the categories of women who experience particular forms of discrimination requiring specific policies to respond to their needs and support their roles.

HUMAN RIGHTS OF WOMEN: Widowhood is one of the most neglected of all human rights and gender issues. The Convention on the Elimination of All Forms of Discrimination against Women has not been effective in relation to widows’ rights. On a daily basis many widows suffer violations to their rights and have no real access to justice through the courts.

WOMEN AND THE MEDIA: Widows are mainly portrayed as elderly, or portrayed as powerless victims, and rarely shown in their key roles in their families and communities.

WOMEN AND THE ENVIRONMENT: Widows are not involved in decision-making on land use, conservation and access to clean water. But they are often farmers or dependent on farming, fishing or sustainable gathering for survival.

THE GIRL CHILD: Daughters of widows are commonly removed from school to care for younger siblings, or to be sold or married early to older men, thereby creating more young widows. They may be forced into begging and prostitution to support their mothers. Along with their widowed mothers, they face barriers to inheritance.

Finally, in this Statement, we repeat our appeal to the UN Secretary-General, given the huge numbers of widows and wives of the disappeared in so many regions, to appoint a UN Representative on WIDOWHOOD and approve the drafting of a UN Resolution on WIDOWHOOD.