Education charity reaches out to widows of all ages 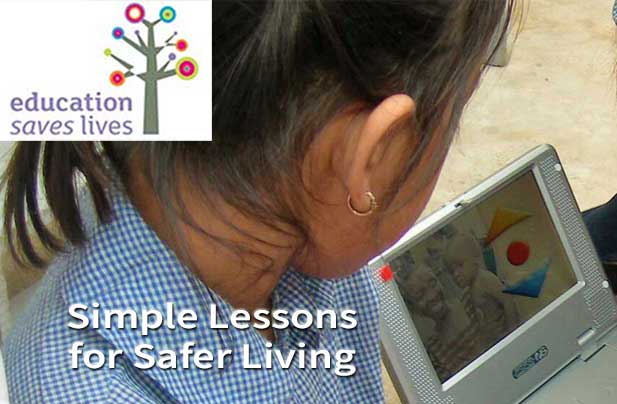 Educations Saves Lives is a UK charity which provides free interactive audio-visual lessons in, over 60 languages, on health issues, human trafficking and other topics to help people live more safely.

Inspired by a widow

The charity was created in the year 2000 by the late Helen Taylor-Thomson, OBE, already age 76.
Helen had been deeply touched by the plight of a young widow she met in Uganda during the global AIDS crisis:

“I met a lady who was tilling the ground with several children round her.
She told me her husband was dead, and she was dying and her youngest child was also dead. However her three elder children were free from AIDS, but she was so worried as to what would happen when she died, as there was no one to care for them. All her family were dead as were her neighbours.
She then pointed to a broken-down building and told me that that was her church and they would have cared for her children, but they too were all dead.“
Helen Taylor Thompson.

Helen realised that it was the lack of simple information which was contributing to the AIDS crisis: families could not protect themselves and each other because they did not now how.

Audio-visual lessons available to all

Twenty years, on there are more than 30 different lesson titles – available as DVDs – which are supplied free to user groups and individuals all over the world.
There are currently a total of 66 languages available. (Not all lessons are yet available in all languages. Like WPD, Education Saves Lives is still a small charity dependent on volunteers.)
WDP Partner Rona Foundation, in Kenya, was particularly interested to see that there are DVD lessons available in the Luo language.

These lessons are widely used by health authorities, community groups, street children’s societies, health clinics, faith groups, schools and individuals throughout the world.
Because they are audio-visual, they are accessible to people of all levels of education – whether literate or not.

Many of the DVDs will be of particular relevance to widows and widows’organisations.

With regard to COVID-19 – the ‘widow-maker’ the following DVDs are of particular note: Basic Hygiene and Immunisation. Both are also available to watch online in many languages.

There is also a Coronovirus lesson available to watch online, in several languages.

“We hope that our association with WPD will enable us to reach out to more widows through the many groups in the WPD network, providing them with any lessons which may be of help.”
Rachel Butt, Director of Education Saves Lives

The DVDS are free to everyone. You can order via this link: See DVD Lessons
For those with a reliable internet connection, the lessons can also be streamed directly from the Education Saves Lives website. Watch Lessons Online