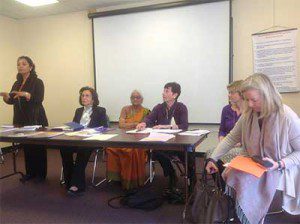 Widows for Peace through Democracy (WPD) applauds the Committee for developing a General Recommendation on women’s access to justice. However, it regrets that the Concept Note, while listing several categories of disadvantaged women, omitted any reference to Widows.

It is often assumed that widows are elderly women respected and looked after by their families. However, widows are of all ages, from the girl child, to young mothers to elderly grandmothers, who all face barriers to accessing justice. Due to the lack of recognition of widows as a disadvantaged group, there is little official data on widows and their voices are not heard in the national or international fora. However, widows have been acknowledged as a group under international law most recently by the Protocol on Women’s Rights to the African Charter on Human and People’s Rights.

Widows face stigma and negative traditional attitudes, for example, widows may be accused, tortured and even killed as witches. Widows also encounter systematic abuse and discrimination even where substantive laws should guarantee equality, depriving them of their rights to inheritance, land and property. This is illustrated in the report submitted to CEDAW under the Optional Protocol by Women’s Legal Aid Centre (WLAC) of Tanzania last October.

While many UN Member States have reformed laws on succession and inheritance, there is abundant evidence that such laws are not implemented. When widows dare attempt to take their cases to courts, there are few successes. Or, even should a widow have her claim upheld, she may be unable to enforce her remedies back in her family or community.

The plight of widows is worsened in conflict especially when they are displaced as IDPs and refugees. In this context, widows are least likely to be adequately rehabilitated and returned to their villages and lands because they cannot prove legal title to their husband’s property.

Furthermore, the wives of those who are ‘missing’ or who have been forcibly disappeared face extreme barriers in accessing information about what happened to their husbands. Without access to this information, widows are unable to rebuild their lives thus violating their right to truth under international law.

Therefore, we ask the Committee to recommend that Governments:

1. Fill the data gap: collect, analyse and use information on the inability of widow’s to effectively access justice.

2. Support and provide legal aid to widows, especially in rural areas, where widows are victims of violence and ‘chasing-off and property grabbing’.

3. Protect, respect and fulfill the rights of widows to access justice in order to obtain information about disappeared and missing persons, including in their capacity as witnesses to other international crimes.

WPD appreciates the opportunity to provide input to the General Discussion and stands ready to assist with further information.