A Reading of The Penelopes of My Homeland 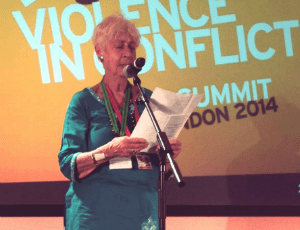 10 June 2014 – Many people know the story of the ancient Greek epics, the Iliad and the Odyssey. Odysseus goes off on an epic journey for more than a decade, leaving his wife Penelope at home. His son grows up, and Penelope is left wondering whether her husband is dead. Suitors are contending to marry Penelope when Odysseus finally returns home in disguise. (Odysseus soon kills all of the suitors.)

The Odyssey was written down in the 8th century BC. But Penelope’s side of the story–the story of a husband going to war, and of the wife’s long wait for his return–remains very modern.

The author of ‘The Penelopes of My Homeland’, Choman Hardi, was born in southern Kurdistan in 1974. In 1988, before her family fled Kurdistan, she saw the Anfal campaign, also known as the Kurdish Genocide. Thousands of Kurdish villages were destroyed and around 100,000 villagers were massacred and buried in mass, unmarked graves. An estimated 50,000 war widows were left behind. Hardi wrote the poem ‘The Penelopes of My Homeland’ to raise awareness about the widows of Anfal. The only difference between Penelope and the widows of Anfal is that, unlike Odysseus, their husbands do not return.

Penelope’s story of waiting and not knowing continues to be the story of many war widows today.

Pictured: Our founder Margaret Owen reads the poem ‘The Penelopes of My Homeland’ by Choman Hardi at the Global Summit to End Sexual Violence in Conflict, London, 10 June 2014.